This year was my first Memorial Day going to the services and ceremonies held at the school I work for, a military school. I want to say something about the ceremony of it, with a Major General (and graduate of our school) giving remarks and the reading of the names of the students and faculty of our school who died in every war America has fought since WWI. But I haven't been able to put together coherently my own reaction to and thoughts about this solemn occasion.

Instead, I will speak of death in another way, offering a couple vignettes.

Over the weekend, my mother-in-law flew with Lauren and our little Sweetpea to Atlanta and back. On the return flight, she sat next to a woman with a terminal illness who was flying to Indianapolis to see her family one last time. She seemed to be at peace with it all--enough so that she was able to talk about it with a stranger.

Back in my hometown, I grew up going to church with a couple who were pillars of the community in a very real sense. They both served out careers as teachers, but more than that they were active not only in our church community but in many other organizations. He was my 7th grade science teacher and a Deacon and Elder in our church; I never had her as a teacher, but she was my choir director in the church choir as well as the adviser for a number of years of the 4-H club I was in. I was a boy who respected adults, and they were probably two of the adults outside my family that I respected most.

His health has been failing of late, and he found himself recovering after a fall in the same nursing home my mother was in. His wife, still very spry in her 80s, visited him daily. A few weeks ago, she was diagnosed with cancer--cancer that had permeated her body and, the doctor said, would soon bring her life to an end. Her family and her community braced for a terrible, unexpected loss.

She died this weekend. Twelve days ago, she traded in their two cars, because her husband will never drive again, and bought a new car. The first car, in the 81 years of her life, that she had bought.
Posted by Sherck at 10:08 PM 4 comments:

Email ThisBlogThis!Share to TwitterShare to FacebookShare to Pinterest
Labels: death

When I make rice, I almost exclusively make brown rice, and I soak it first because that's supposed to be good for it (and we prefer the texture and taste). However, there are times when I want rice but I don't want to invest so much time in the project. And that is where orzo comes in. It's just a pasta, so it cooks like a pasta, but it has something of the shape and feel of rice to it. Whole wheat orzo is preferable to the regular stuff, but it seems difficult to find in a lot of supermarkets; I've just ordered some through Amazon. I suspect it takes some getting used to, just as whole wheat pasta took some getting used too--it used to seem like such a sacrifice to eat whole wheat pasta, but now it just seems... normal.

Below is a tasty side dish I threw together with orzo. I served this along with salmon--what I wanted was something like rice but I got a 2-for-1 deal here, getting in a vegetable along the way. This didn't make a whole lot, so the recipe should probably be at least doubled.

Cook orzo according to package directions. Meanwhile, heat a skillet, spray with oil, then add spinach and pine nuts. Before the spinach has wilted, add garlic and continue cooking until the spinach is just wilted. Add lemon juice and olives. Add cooked orzo. Add cheese and salt and pepper to taste.
Posted by Sherck at 12:01 AM 1 comment:

I would like to return to a weekly tradition that I started at my old blog, the Thursday Think 'n' Share. It's a sort of "getting to know you" game that I hope my readers  will join me in playing each week. The short of it is that I pull three random question from one of various decks of The Ungame and answer them. Readers are encouraged to post their own answers either in the comment box or on their own blog (or Facebook page). If you're not doing it in the comment box, do let me know where I can find them, because I'd like to get to know my readers better at the same time they're getting to know me. You can be as serious or as silly as you feel like being on any given day for any particular question.

I'm sure that, years ago when I was blogging regularly, I have answered some of the questions that will come up, but considering how much my life has changed since then, I'd imagine my answers will too.

... stuff. I can't answer this concisely. I used to collect comic books, and that collection still rests in my mom's house (I also had a baseball card phase as well as, okay, a lot of different things). I buy a lot of books, but I'm not a collector in the usual sense--they're not valuable books, not first editions or what have you. At the same time, I'm not good at throwing stuff away. We're not talking serious hoarder levels here, but I have a hard time letting go of stuff. Oh, and I suppose it would be fair to say I collect board games--the more obscure ones, the Euro-style games (you know, the good ones).


Do you like ballet or other dance forms? Why?

Or why not, I suppose. I guess I would say "sort of." I appreciate seeing the amazing things that trained dancers can do with their bodies, the ways they can move, their strength and flexibility, but I'm not sure I "get" it. I get music. Ballet is kind of interesting to watch, but it's not an art form that I really feel like I understand.

Tell about the most significant person in your life.

That would have to be my daughter. There's a song lyric that I'm pretty sure is about having a child: "I'm gonna need a second heart for all this love." That seems to describe it pretty well--until I became a father, I'm not sure I really understood love, at least not the sort of love that having a child teaches one about. My wife's pretty darned significant too, for what I suppose are obvious reasons.

Happiness; or, what shall we pursue?

"We hold these truths to be self-evident, that all men are created equal, that they are endowed by their Creator with certain unalienable Rights, that among these are Life, Liberty and the pursuit of Happiness."

Has another phrase so shaped the psyche of our nation? As usual, though, the most difficult words are some of the most common: what is happiness? What does it mean to pursue it?

I recently listened to a podcast (Philosophy Bites) with a guest talking about happiness and how it's been seen at various times in history.

Historically, he noted, for medieval man happiness was a sort of accident--it might happen, but it wasn't the expected, normal state. Instead, salvation was where it was at, because life was lousy (for most people, most of the time). From the Renaissance through the Enlightenment, that changed, to the point where we were seen to have a "right" to "pursue" happiness, though the podcast's guest noted that in modern times, this "right" has become something more like a "duty" to the point where we need to be constantly questioning whether or not we're happy.


We have this idea that we should be happy, so we're constantly questioning whether or not we are and, I suspect, losing what peace we might have if we appreciated what we have.

Pascal Bruckner, the interviewee on the podcast, took something of an ancient Greek perspective on the matter. For the ancient Greeks, happiness was a judgment that could only be made at the end of a life: has one lived a good life, has one achieved excellence in the things one aimed at? In other words, it was something different from momentary contentment, momentary pleasure--a good reminder of how words change their meanings and/or have ambiguity thanks to multiple meanings.

In any case, two insights he offered that I particularly liked were these: first, the idea that "happiness is being pointed in the right direction." Second, he suggests that "happiness is a secondary goal. Other feelings and goals are more important." In other words, happiness isn't something we pursue as such. We pursue other ends--"engaging in activities which both enhance life for yourself and others and which bring you a sense of meaning"--and the fact that we're doing so, that's where happiness is. We're pointed in the right direction with regards to the meaning in our lives, the goals in our lives, the values that we hold.
---------------------
The preceding grew out of a comment made on a friend's blog, linked to where I quoted her in the final paragraph. Thanks, Sarah, for getting me to write about something I meant to write about.
Posted by Sherck at 1:20 AM No comments:

Repent! The End (of not blogging) is Here! 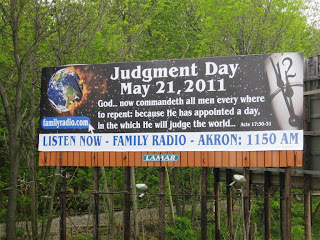 I gave it an extra couple days there, just to be sure, but I guess the world's going to continue after all. We thought the tornado sirens on Sunday might have been it, but no. Or, anyway, if anyone was raptured away, it was no one I know. If that was my corrupting influence, I'd like to apologize to any of you who would otherwise have had a shot.

When the world was going to end, well, blogging regularly didn't make much sense in the grand scheme of things, but I guess I'll have to take up my post again and get back to it after a month away.

So how's everyone been? My daughter continues to grow and learn and be adorable. Work keeps me and my wife busy busy busy. And I've been carving out time to work out every day and seeing good results. It's good that the world didn't end, though, because I don't quite have the six-pack abs to show my Creator (I assume that's part of the judgment). Still, I'm down about 13 pounds since I started the P90x program in early April and about 25 pounds since the first of the year. I'm feeling good.

I can credit a low-carb diet with some of the weight loss, and at the same time I've been on a low-internet diet as well. I've barely checked Facebook in the past month, though I have been following some blogs and I've been consuming other media--audiobooks, some podcasts, and just a little paper-and-ink novels--it's been tough to find the time, but audio formats can fill in time here and there in ways that are harder to do with actual books.

I'd like to get back to blogging regularly, and I think the time off has been good for me.
Posted by Sherck at 11:13 AM 1 comment: