I’m a little late for the Holidailies party, but better late than never, especially when it comes to writing. There was a span of years where I wrote in a pen-and-paper journal daily. A year or more where I blogged every day and many years where I came pretty close. A fee Novembers where I cranked out 50000 words.

But all of that is years in the past. And I can’t help but think that my life is poorer for it.

Maybe this will fizzle out after December, or even sooner, but I suppose a day with a bit of writing is better than the alternative. 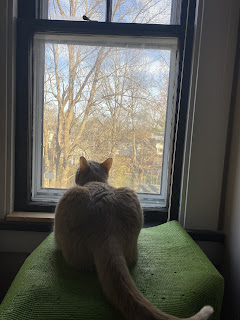 Zen here has been with us eight months now, and he’s well beyond the skittish new kitty phase. While he is absolutely A’s cat, he lets me feel like the favorite when the rest of the family is away at school (not every day, but some days—I’m sure he doesn’t want his attention to go to my head).

Perched on a stool in my third-floor office, he is the majestic lion, king of all he surveys, tail lashing with murderous intent, the squirrels and birds he spies living only on his sufferance (and that of a pane of glass).

That’s basically writing in a nutshell, isn’t it? A lofty vantage point from which to observe, a bit of distance, and natural constraints against action.