Here’s the standing desk where I spend a significant portion of my day: 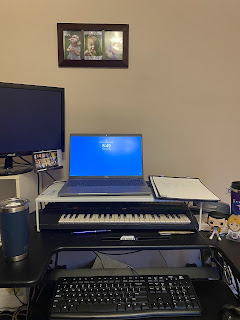 Before I started working in tech a few years ago, I was totally good with the single screen of a laptop; now it’s so hard to too anything with fewer than two!

The music keyboard was added just yesterday. It’s totally irrelevant for my work, but I had the space there and I thought it would be a nice prompt to bring a little musical creativity into my day. Btw, that keyboard is probably 35-ish years old—it was a delightful birthday present one year (now it’s a barely adequate instrument for, really, any purpose; but there it is!).

The Freddie Mercury funko pop figure on the right was a Christmas present in 2019, when I’d just started a cubicle job. Poor guy was stuck in an office I never went to for two years until he was finally recovered this summer. Do you recognize his band mate?

The picture above is all three of my kids around age 2, each with a dandelion. Our nanny took all of the pictures over the years and gave us the set when we moved away (she was such a treasure).

The picture taped to the monitor is from a Zoom meeting with some of my god college friends. One of them took the screen shot and printed it out and mailed it to each of us because he thinks it’s good to have physical mementos of things. We started having weekly Zoom meetings in March 2020 because it was a COVID thing people were doing. We’ve had this meeting almost every week ever since. Two and a half years and counting of connection with old friends.

The notebooks to the right are Rocket Notebooks: erasable pens and integrated with an app to photograph, save, and organize your pages. It’s pretty neat.