As I announced recently on Facebook, I've committed myself to running a half-marathon in just under two months. On the surface, this might seem like a crazy idea: I mean, I haven't run farther than 6 miles at a time in my entire life and when I say "I'm going to go work out," I most pretty much never ever mean "I'm going to go for a run." But if you dig deeper, it actually is a crazy idea.

I mean, I don't have any business running a half marathon. Seriously. I did track for exactly two years of my life--seventh and eighth grade--and I was not only terrible, I also hated pretty much everything about track except for walking from the junior high to the high school with my friends and eating sugary crap on the way at the gas station.

But, okay, actually, I have at various times in my life taken somewhat to running. But not all that recently. So why a half-marathon? Well, in part because one of my co-workers asked me to. Not just me, pretty much everyone in the whole school, and it was totally an option to run a 5k instead of a half. But the thing is, even though I know I'm in pretty terrible cardiovascular shape, I'm still pretty confident that I could go out and complete a 5k right now. Maybe not very quickly, but I could do it. But 13.1 miles? I don't know. It's the challenge, I guess. See if I can do it.

So let's talk training. For most of the winter, I have decidedly not been training for a half. My training this winter has been almost exclusively weight training, shaped by some time I spent hanging out with the Marines in San Diego in late January. While there, we took the Marine Combat Fitness Test, which included this thing where we lifted a 30-lb ammo can overhead as many times as we could in 2 minutes. Now, 30 pounds isn't that much, but I found that trying to do it continuously for 2 minutes got really, really hard. 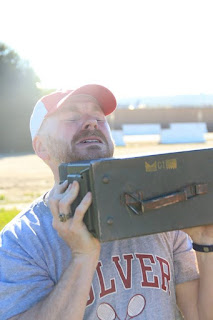 So I thought "Huh, I thought I was fairly strong, but apparently I don't have a whole lot of endurance." Which makes sense since for the past few years I've mostly been lifting in the 1-5 rep range. So, with that seed planted, this winter I've still been focusing on the "big lifts," but I've structured my training around a 2-minute max effort. It took a while to find the right weights and, for that matter, all the right exercises, because it turns out that it's really hard to do back squats continuously for two minutes while maintaining good form (so I've been doing 2 minutes of leg press and adding in some heavier squats later in the workout). Besides that, I've been doing bench press, lat pull-downs, dead lifts, and shoulder press. It's been pretty enjoyable overall: I feel like I'm getting a pretty intense workout, but it's very efficient. Even with warm-ups and time to recover between exercises, I get in and out pretty quickly.

Last week, before I signed up for this half marathon, but with the possibility in the back of my mind, I went for one run in addition to my weight lifting workouts. And I have to say, it wasn't exactly the kind of workout that screamed "Hey, you should sign up for a half marathon!" Because I ran like 25 minutes and stopped several times along the way. So maybe a half-5k...? Is that a thing?

But I had an abiding faith that it would get better this week and--SPOILER ALERT--it did. But more on that in my next post. I figure I'll use this half-marathon thing not only to motivate me to train in a different way but also to blog more frequently. And just like it would be a bad idea to go out the first time and try to run 13 miles, it would also be a bad idea to write much more than I already have. So I won't, except to recap my training last week:

Email ThisBlogThis!Share to TwitterShare to FacebookShare to Pinterest
Labels: fitness