Week four was spent on the road, so I transitioned from mostly lifting and occasionally--almost as if by accident--running... to ONLY running.

Sunday we were at my in-laws in suburban Cleveland, so I got in my long run on loops of a housing development where every pair of houses looks like those pictures where you have to identify the five differences between them. I actually like running there. If nothing else, it's flat, which I think I made clear in my last post is much preferred.

So I ran a big loop through the neighborhood and circumnavigated it six times in 57:27. Turns out I ran 5.64 miles, which turned out to be a 10:11 pace. I was pretty happy with that. It wasn't nearly as miserable as last week's run, though I also did not achieve Zen-like equanimity. So it goes.

From there, we went to southwestern Kentucky for five days of camping. I'd like to say that I only ran every third day because I was tied up with the necessities of bare survival or family fun time, so that's what I'll say. Totally not lazy.

Wednesday, I explored the campground at a jog with my running buddy. 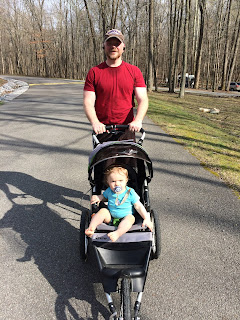 I haven't really run with a jogging stroller before, but of course it does take a bit more work to push the stroller, to guide it, and not dump her out of the stroller. Yeah, yeah, she's buckled in, but it's not exactly a five-point harness. It's not even a three-point harness. It's just a strap. You can't see it in the photo, but there's also a strap for my left hand which allows me to periodically let go and just run while it coasts along without the risk of, you know, letting her outrun me on downhills. We ran for about 20 minutes, and around that time I thought I'd try out one of the trails.

Even though it was paved, it had all kinds of things to jiggle my baby around: cracks and bulges, sticks and debris, and it also was very up-and-down with relatively sharp curves. In short, it was not buddy-friendly. So we walked for ten minutes until we found our way back around to the campground and ran around for another twenty (so back to my 40-minute running, albeit with a break). All in all, a fine run.

Then on Saturday, I got to take a solo run. I ran on the nice pavement, but I was once again drawn in by the idea of trail running. I saw a sign for parking for The Heritage Trail. That sounded promising. What led away from the parking lot was a gravelly path to an area that served as a dump site in one direction, and this in the other: 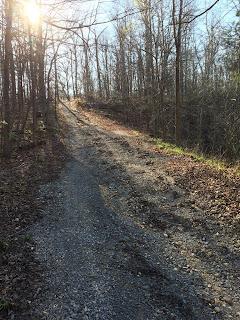 If it looks like that goes more or less straight up, that's because it more or less does. And it's rocky. Apparently the trail celebrates a heritage of pain and struggle. Or maybe not. A bit further on--and a bit further up--I came to this: 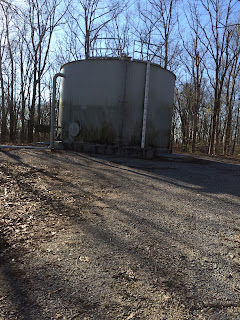 And the path, at this point, grew more... let's say subtle. Like "is this actually a trail? Have they just not gotten around to clearing away this fallen tree? Or marking any of it as a trail?"

I finally decided I was mistaken about this whole trail thing and went back the way I'd come. Which was, remarkably, worse going down than up. Wearing minimalist shoes, stones are not a lot of fun, particularly with the added force that comes from going downhill.

Anyway, I got back out to the road and followed it up to this sign: 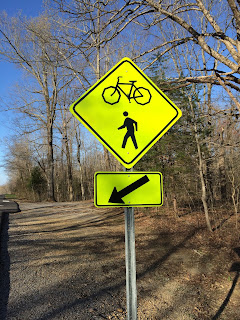 I'm not sure why, but the bike has octagonal wheels... and the hiker has an octagonal head.

The path was just a dirt trail, but it was clear and well-marked. Lots of ups and downs, it kept me working pretty hard throughout my run. It's a very different experience than running on a  road, where I can kind of zone out, kind of get into a meditative state. Running on a trail like this, I had to remain alert throughout to avoid stepping on stones or tripping on roots, to track the trail's twists and turns. 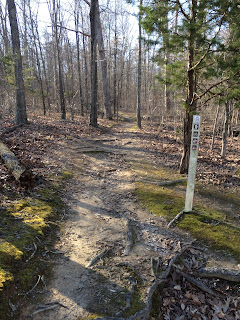 It was also a rather pretty run, though that could be a bit of a liability too. Our campsite was very close to a beach, and the beach area was on a sort of bay. I found that this trail went out to the edge of the bay and then on along the lake, and I wanted to take a picture... but my phone was full. Even after I deleted voicemail messages and photos, even after I restarted the phone, it still insisted that it didn't have any memory left for photos. So I lost some time there trying to get the camera to cooperate.

I ran about 27 minutes, then kind of walked around futzing with the camera for five minutes or so, then continued my run long enough that I'm pretty sure I ran at least an hour all told. A good run to cap off a decent week before we left the next day for home.

Sunday: 5.64 miles in 57:27 (paved and flat)
Wednesday: ran 20 minutes, walked 10, ran 20 (paved, a bit hilly, with a jogging stroller)
Saturday: Ran approximately 60 minutes with one break of about 5 minutes about halfway through (mixed trail and pavement)
Posted by Sherck at 9:31 PM

Email ThisBlogThis!Share to TwitterShare to FacebookShare to Pinterest
Labels: fitness