When I was growing up, we always had an easy solution to where to put the tree: there was an entryway from the front door that was perhaps an 8x8 foyer. You couldn't, normally, justify putting anything there because it was an entrance to the house you'd be blocking, but the fact of the matter was that we never used that door and no one who knew us ever used that door--the garage or the back door were the correct ways to enter the house, period. That foyer always made the perfect place for a Christmas tree, though: visible from the living room and dining room, yet out of the way. We always put up a big door-sized thing with Santa Claus on it--my mother had it from her days of teaching elementary school. And the tree topper was a double circle of blinking, colored lights, surrounded a star of blinking, colored lights, with a three dimensional Santa Claus head imposed upon it, complete with hat and fluffy beard. Man, that thing was probably hideous to anyone with taste. Fortunately, no such person lived with us or, as near as I can tell, ever visited.

Which brings me back to the fact that Mom had a lot of decorations that she had once used in her classroom, all laminated. I used to love decorating the house with all this stuff. The day after Thanksgiving was the first day I was allowed to decorate, so that's when the magic happened. Usually, we'd fire up the wood-burning furnace as well, just for atmosphere. We had an ancient nativity scene whose manger looked properly, well, mangy. It looked like a real barn instead of a sanitized manger scene. We had figures from at least three different nativity scenes all mixed together in a hodge-podge. At some point, I started setting up the wise men across the room and gradually moving them over to arrive on Epiphany (and, of course, the shepherds had to go by then!).

For a number of years after I graduated from college, I didn't do much in the way of decorating. It seemed fairly pointless, first because I wouldn't be celebrating Christmas where I lived, but instead going home, and second because Christmas had lost some of its luster when I set aside my faith. I still liked Christmas as a holiday, but it didn't have a lot of magic any more (I'd also rather less materialistic and didn't get as excited about gifts, but that's another story).

The first year Lauren and I lived together, I wouldn't have put up a tree or decorations if she hadn't more or less made me do it. Ditto that the next year. Last year, though, perhaps because we had Thea on the way (in the pipe, if you will), I found myself getting more excited about Christmas again. I was the one who wanted to get lighted evergreen garlands to decorate. I was the one who--for the first time in our life together--decorated the outside of the house, as a surprise to Lauren. Scrooge had left the building.
When it comes to tree placement, it's never been so easy anywhere I've lived as it was when I was growing up, and the task was even more difficult this year with a baby who's crawling--almost walking--and curious about everything.  Fortunately, our tree is only 6' tall and our ceilings are close to 9: we just put it up on an end table so she can't reach it, which will work out well until she tugs on the tree skirt and pulls the whole tree down on top of herself... 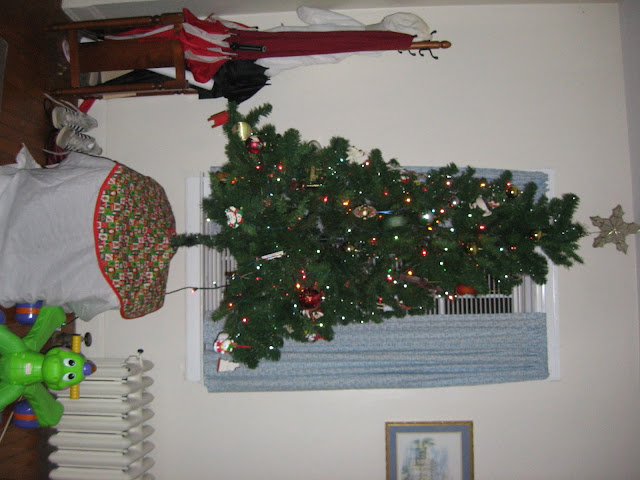 The tree skirt, by the way, was my mom's, which we always used when I was growing up. All of the ornaments except for the ones we've bought together are Lauren's. The little dinosaur is, theoretically, teaching Thea to walk. And putting the tree on a box in front of our window probably makes it appear to passersby that our tree is a lot bigger and more impressive than it actually is.
Posted by Sherck at 10:53 PM