All I Want For Christmas Is...

A few weeks ago, when I arrived at my mother's house a couple day's before Thanksgiving, she barely let me in the door before she started asking what I wanted for Christmas. And the thing is... I had no idea.

Long gone are the days when I would have a number of items whose value roughly equaled the GDP of some small countries circled in the Sears and/or JC Penny catalogs the day after they arrived. It's not exactly because I have everything I'll ever want, it's just, well, let's think about it a bit here:

1. I've got well over 100 books on my various wishlists at Amazon (it's public, so you're all welcome to buy me anything on there!)... but I've already got dozens of books in my possession that I haven't read--but would like to--if I had time.
2. I love board games. Love 'em. Especially the more complicated, "Euro" style games. But besides lacking the time to play them, just as I lack the time to do all the reading I would like to do, I also lack a group of gamers in my area who would be as psyched to play those games with me as I am. Or as I would be, if I had time, which I don't.
3. Oh, I know something I do have time for that I need... a new car! Something more fuel efficient to drive on the days when Lauren and I have to drive separately. Oh, but even this Santa didn't do cars:
4. And if a car's out, I guess it would be a bit much to ask for Santa to take care of the cost of the work we need to have done on our basement after the New Year, huh?

So I guess what it comes down to is that the things I really want for Christmas this year are 1) time and 2) piles of cash. Really, is that so much to ask?

::sigh:: It was easier when I could just circle things in the catalog, as I'm reminded by watching my almost-four-year-old. If you've got a few hours, ask her to walk you through what she wants. If you've only got 15 seconds, she could probably point out in the catalog everything she doesn't want.

Actually, the sub-zero weather did give me an idea for a reasonable enough Christmas gift, which I passed along to me mum: I'd like a trench coat that would be nice enough to wear over my jacket and tie to work (I'm thinking black leather). And speaking of clothes, call me crazy, but I'm thinking my next pair of dress shoes for work might be these: 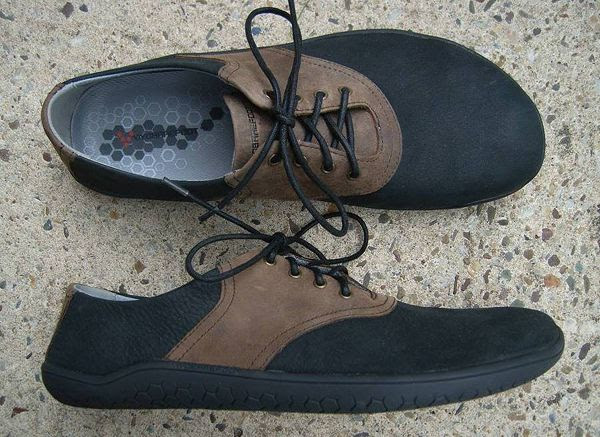 These "minimalist" (i.e. flat, with a thin sole) shoes are both made by Vivobarefoot. I'd lean toward the first one as a bit dressier, but since I'll probably end up buying them myself, I'd lean toward the second, which is just over half the price of the other.

So there we are. Christmas list made.
Posted by Sherck at 11:52 PM

Email ThisBlogThis!Share to TwitterShare to FacebookShare to Pinterest
Labels: holidailies