How I Learned to Cook

Today on a fellow Holidailies blogger's blog, she talked about cooking at home versus eating out. That got me thinking back to our Thanksgiving break, when we had a Chinese student spending the holidays with us, and noticing that I do all the cooking in our house, he asked how I learned to cook. So this is a post about how I became a cook.

I grew up in a house where my mom cooked dinner pretty much every night. I wouldn't say that I learned to cook from her, though. I did develop a deep appreciation for the baking of desserts. From an early age, I had a strong understanding of all aspects of cookie baking, from bringing together the sugars and fats to adding the rest of the ingredients to tasting--and constantly re-tasting--the dough to make sure it is good, to spooning the dough out onto the baking sheet (pressing peanut butter cookies down with a fork in a criss-cross pattern) and taking the cookies off. My mother had a firm belief that making a triple recipe of cookies was no more trouble than making a single recipe, and once you got started baking cookies, you might just as well bake a half dozen different varieties. She would freeze the extras, if any could properly be called "extra."

However, other than cookies, I was an incredibly picky eater (the only pickiness I showed with cookies was a distaste for raisin). I drove my mother and my grandmother crazy with my unwillingness to eat a whole lot of things. However, when I went to college, I went ahead and tried a bunch of things because a lot of things were new and I wanted to see what I would like, and also I recognized that being a picky eater made me look kind of weird to other people (the positive power of peer pressure!), so I started eating more things. 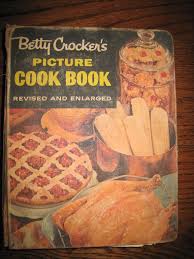 One of the things I discovered in the dining hall was the freshly baked bread they had there, but when I came back home to my small town in northern Ohio, there wasn't yet any available other than whatever varieties Wonder made: white, wheat, rye... and I think they were just coming out with potato bread. So over the summer I came home and wanted to learn to cook—but more especially to learn to bake bread. So Mom got me a Betty Crocker picture cookbook and I started with that. And I basically learned how to make white bread, whole wheat bread, and dinner rolls, but being fresh-baked, those varieties were still pretty exciting.

Later that summer, I went to a writing workshop, and fired up about my new interest, I talked about it with anyone who would listen. One of the friends I made over kitchen talk was an adult male with an interest in cooking, who recommended the Moosewood Restaurant’s cookbooks. So I jumped into Moosewood cookbooks with both feet, just trying out one recipe after another when I got home. Because those cookbooks were almost exclusively vegetarian,  I’m pretty sure we ate vegetarian for a solid month, though not with any serious intent to be vegetarian, but because we thought the food was pretty good.

I continued cooking, mostly during the summers, but also sometimes for friends in college, and then I went to graduate school and lived in an apartment by myself, so I just continued cooking, because it made sense to do so: cheaper and more satisfying. And the more I did it, the better I got at it; and the better I got at it, the more I enjoyed it. At first, of course, I was basically just following recipes. But the funny thing is, the more time you spend following recipes, the more you tend to get a feel for what works together, and the more you become willing to improvise and take risks. Since I was just cooking for myself, I didn't have to worry about pleasing anyone but myself, which is a liberating way to do things.

For five years after graduate school, I worked and lived at a boarding school, where I basically didn't have to cook (in fact, the fact that I was required to eat most of my meals with students actively discouraged me from cooking most days). But there, too, I was basically free to cook what and when I wanted to, no pressure.

By the time I started living with Lauren, I was pretty thoroughly competent at cooking, and I've been doing it ever since, experimenting with lots of cuisines and dietary plans in the intervening years. I have quite a few cookbooks--some of them are go-to cookbooks and some of them, I go through phases where I'm always cooking from them and other periods where they sit collecting dust. I pull things from the internet and either follow them or modify them as the spirit moves me.
Posted by Sherck at 9:50 PM