Enjoy the journey--sometimes' that all there is

Inspiration struck today, as I decided to take Beans (our almost-three-year-old) to the library for story time. The brilliance of the plan was that I had the idea early enough to bring it to fruition.

Story-time is at 11 am, I floated the idea around 10:20. She loves going to the library, so that was an easy sell, but she also loves to walk there and hates wearing a coat. Since it's around 30 degrees today, I was afraid I was in for some tough negotiations, but she was actually pretty reasonable (on this issue).

She did, however, want more to eat. Say, her sister's leftover Nutella toast. Fair enough. I cut it into smaller pieces and let her have at it. So now I had to budget in time for cleanup, because Nutella might as well be called a hazelnut spread-all-over-everything. Still, no problem. I gathered my own things, got her to put socks on while she contentedly made a chocolatey mess of her face and hands. Then we cleaned up... and then she wanted more of the Nutella toast, so we had to clean up again. These things happen. When you're not-quite-three, it's hard to predict that maybe you should eat all the Nutella toast before cleaning up.

Oh wait. Okay, yes. Had to think about that for a second.

So we got set to start walking, but time was getting tight. We probably weren't going to make it for the start. Oh well. Onward!

Before we were one house away, "my hands are a wittow bit code." Especially the one holding her fig bar. Back we go. Now, where are those mittens? How about these gloves... nope, comically large. Um... How about we just accept that we're going to be a little cold? She agreed.

It's just under half a mile to the library, and well before we were halfway there, she declared that she was too cold and I needed to carry her. Or, as she says "I pick you up!"

We got to the library after story time had started, but it was still going. We hung up our backpacks and coats and went in through the tiny door and found a place on the floor. Two songs and two stories later, she declared that she wanted milk.

My explanation that they didn't have milk at the library, and that we'd have to go home to get milk led to an inevitable conclusion: "Let's go home." Seriously? You'd rather walk home 5 minutes after we got here than get to the best part of story time (bubbles at the end) or play with the toys in the kids' section? Because once we get home, we're not going back to the library.

Yeah, she was good with that. 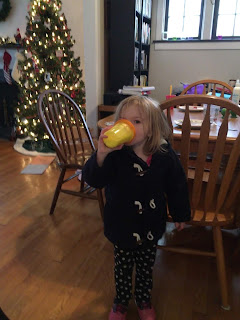 Now, it would be easy to look at this as a failure of sorts, or at least a pretty lousy deal for what we got out of it. I had planned to connect to the internet (saving my phone hotspot data), get some things done on-line, and then cuddle up with a book while she played with toys and made friends. Clearly none of that happened (glad I carried all that stuff in my backpack, btw).

Nonetheless, wins were had. First, we got outside and got some fresh air. The ratio of my exercise to her exercise was more than a little skewed, but it's probably for the best, selfishly speaking, if I want to avoid slouching into "dad bod" territory. And as much as we only had five minutes of story time, it was actually a huge step forward. In past story times, she has basically ignored the stories and avoided the singing and movement, and just burrowed into my lap. This time, from her safe little warren, she did answer questions ("which animal's ears are these?" and she moved her feet a little bit at the appropriate place in the one song. At this rate, we'll have her participating fully about the time she's reading independently, but whatever. Baby steps are steps, and I'm marking them in the win column.

And hey, I got to spend quality time with my girl. Up [very] close and personal, mostly cheek to cheek, arms wrapped around my neck or buried in my coat. The perfect place to hear her little observations and questions ("Yook at doze flowers!" "Dere's two sqau-yuls!").

Where else should I rather be?
Posted by Sherck at 1:08 PM