Wintertide in a small world

Wednesday night, one of the choirs I sing in had its dress rehearsal for our upcoming concert. Lots of professionals joined us--brass, percussion, harp, and two soloists. The soprano soloist looked really familiar when I saw her.

And then I realized it. Once upon a time, this woman was my mother.

Hold on, I'll get back to the soloist in a minute. I'm really excited for our concert. It's been great this fall and winter to be singing regularly in a choir. Almost all the pieces we're doing were either instant hits with me, or else they've grown on me over time.

Oh, and I should add right up front, for anyone local (east side of Cleveland): the concert is this Sunday at 7:00. See flier for details! 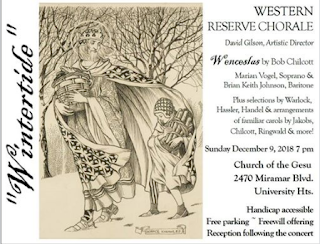 Pro tip: the church is huge, and the best sound is going to be 10 rows back from the front (and further), because it takes about that far out for everything to blend. If you just want to hear the trombone, by all means sit front row on the right.

I first started singing in choir because of drama. That is, doing theater in high school, not people being all crazy, though that's also a good enough reason to sing. I was basically pulled into drama by one of my best friends (isn't that always the case?), auditioning for the fall show and getting a small role, auditioning for the winter and getting another small role, and then auditioning for the spring musical, ending up as pretty much an all-purpose chorus member in Fiddler on the Roof. I was a Jewish boy, a Russian dancer, and a bottle dancer (despite no dance experience). Singing in the chorus, one of the older girls said that I should be in choir, and when you're a freshman boy and an older girl tells you something, you tend to hear that just a little bit better. So I joined our church choir (not, incidentally, a great place to meet girls) and then I ended up pulled into the choir for my sophomore year as an accompanist (we changed directors, though, and I bailed out of playing the piano--because I wasn't very good--and started singing instead.

Even though the choral program was something of a dumpster fire that year, I found myself singing in the show choir as well as the concert choir, and so when we got a great new director my junior year, I was ready to go and found myself a section leader in the regular choir, men's ensemble, and show choir. Our new director not only raised the musical level of our choirs tremendously, but he also brought in several elements that spoke especially well to the adolescent male soul. First, the men's ensemble was something new and special. We sometimes rehearsed during the school day, but often we met in the evening. Now, I'll argue that there's just something special about the harmonics of a male vocal ensemble that makes it inherently amazing, but beyond that I think that there's also something magical about making the extra commitment, spending the extra time together, working toward a common goal.

And that was also something that our director brought: a focus on goals and competition. I assume it's more or less ubiquitous, but our choirs and bands played in district competition each year, where groups were rated from 1-5, with 1's advancing to the state competition. The previous year, with our one-year director, our best choir got a 3, and our other choir got a 4. Ouch. We were acutely aware of what losing looked like, but I think it was pretty clear early on that our director, with clear goals, a plan, professionalism, and attention to details was not taking us to another district competition massacre. From day one we learned to sight-read,which also spoke to my soul as a pianist (however mediocre) and trombone player (again, however mediocre). I already knew how to read music, but it was another thing entirely to do so with vocal music, and I loved the challenge.

Anyway, long story a little less long, we got 1's at District that year and 1's at State. Well, except our men's group, which got a 2. Hugely disappointing, considering all the work we put in, but also hugely motivating for those of us who were juniors. Spoiler alert, we got 1's at State the next year.

I've already gone on at length, and there's one more story that I've committed to telling at this point, so I'll just say that my college experience with choral music was even better, and better in very different ways from the ones that made my high school experience good. My experience was such that I was happy to go off and pursue a master's degree in choral conducting afterward. And not just because I had no idea what else I could do with my liberal arts degree.

To bring down the curtain on this post, I have to go back to elementary school. I think it was back in 6th grade, I was one of a handful of my classmates who got the chance to audition to be in a high school play. I got the part, and I and a 4th grader from my school became children in this play (speaking lines and all!), Life With Father. Obviously, "Father" played a big role. Mother, though, was the teen-aged version of the woman I saw again Wednesday night for the first time in maybe three decades. Her path took her from our little high school's theater and music departments to the Cincinnati Conservatory of Music and on to a professional career that found her in Cleveland, where she took this gig as a soloist with our choir. And obviously own circuitous route through music degrees brought me here as well.

I'm not sure if she remembered me with any specificity, and I can't blame her. I was in a show in high school that used elementary kids, and if one told me that we were in a play together, I can confidently say that I have no memories of working together. Though, to be fair, I was a pretty memorable kid, and there were two of us (as opposed to the gaggle of brats that infested The Best Christmas Pageant Ever). Still, it was nice to connect briefly with her, to talk about the family that still ties us to Bellevue, Ohio, and the paths that brought each of us to Cleveland, and the apparently-small-world of its choral music scene.
Posted by Sherck at 11:24 AM