Of elves and shelves


Almost a decade ago, my wife unknowingly committed us to spending all of December for the next 15 years trying to remember to move our very own Shelf Elf from place to place each night. We did pretty well when it was new and fun and—crucially—when we only had one child.

But as we’ve gotten worse about moving the elf, we’ve gotten better at concocting stories to explain the elf’s failure to move.

This morning when my 5-year-old woke me to come down and make her breakfast, it occurred to me that I had failed to move it and—as our 11-year-old collaborator was at a sleepover and my wife is less-than-mobile with her broken ankle, the elf had not been moved. And, in fact, it had only moved once in the last week. My wife's explanation to the kids has been--since she's in the room with the elf--that it's her fault the elf hasn't moved, because she's stayed up too late. And it seemed like we were going to have to keep up that pretense yet again.

But then a window of opportunity opened: she stopped to go to the bathroom there on the 3rd floor. So I rushed downstairs to move the elf, only to be stymied by our 9-year-old emerging from the 2nd floor bathroom and following me downstairs.

However! As she proceeded me into the living room and sat down on the floor, entranced by a screen, I saw that the window had not, in fact, closed. I was next to the shelf with the elf (literally, she was on a bookshelf), one child was facing away and the other was still upstairs. So I surreptitiously moved to the bookcase and yanked the elf off one shelf and crammed her into to a different shelf. 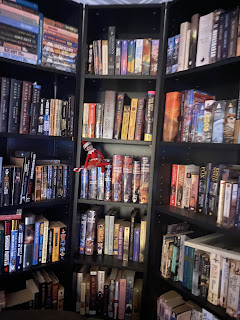 And then I went to the restroom myself, mission accomplished.

Except for one thing… the 9yo had already been downstairs and seen that the elf had NOT moved. Then her sister comes down and says "Look! Minga moved last night!" and her sister's like "No she di...!!" My wife said that the look on her face was priceless, though she was almost as surprised as our daughter, since she hadn't seen me move it either.

I had to stay in the bathroom a bit longer to get my face composed, I was laughing so hard at the whole situation.

So now, apparently, the elf can also move at times other than the dead of night, and the Elf on the Shelf lore continues to grow.