Just in time, too!

With temperatures in the high thirties through low fifties the past several days, all the snow has melted, so no white Christmas for us. It's also been strange working in a field that isn't education--I'm not used to having to work any of the several days before Christmas, never mind on Christmas Eve!

I was also realizing last night as we were wrapping the last of the presents that I've hardly listened to any Christmas music this year. My wife put some on the radio on our way home from Thanksgiving, but that's about the only time I've heard the music of the season.

Still, it's clearly just about that time.

The presents have been piling up under the tree for weeks now, my wife picked up my mom yesterday to stay with us for several days, and I was seized by an unaccountable desire to cook a ham for dinner. At the same time, I was compelled to buy an industrial-sized package of cinnamon rolls for tomorrow morning (I've made them from scratch some years, but when I saw them in Costco for the purchasing, I decided that I could find better uses for my time).

I'm looking forward to seeing how everyone likes their gifts. I got my wife something she really wants and something else that I think will be a nice surprise. After doing a ton of research (probably almost nearly 15 minutes), I made an impulse buy at the bookstore for my mother, which I think she'll love. It's Sherrod Brown's book on 8 influential senators who sat in the desk he sits at--she loves Brown, in general she loves reading about current political figures, and she enjoys history, so this book is a real triple threat. I think the girls are going to love so many of the things we got for them and I'm getting excited to see their reactions tomorrow morning.

Also, I got this guy early, so I'm already a Christmas champion, my friends. 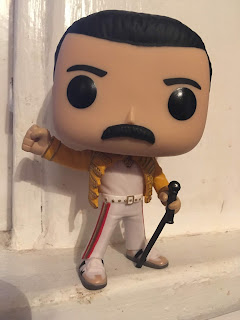 I think we would have waited until tomorrow to open him, but I already knew he was coming and, besides, we couldn't leave him in a box when he wants to break free.
Posted by Sherck at 5:51 PM