This Christmas, I got...

more laundry to do, apparently.

Littlest got sheets for her bed (along with wall clings) with characters from her favorite (-ish) show, PJ Masks, which she wants on her bed more or less immediately (fair enough), which means laundry must be done. Plus Middlest and Firstest got quite a few items of clothing, and the sooner they're washed the sooner they can be worn. So yeah, I got laundry for Christmas.
Also, relevant to the above photo: 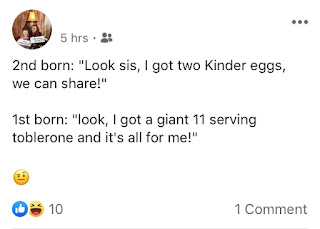 I didn't get just laundry, of course. It was a really nice Christmas. We might have gotten too much stuff for the girls, really, and we were probably compensating for last year, when I didn't have a job. But the excitement was palpable, pretty much every gift was a hit, and we still had Second Christmas to look forward to at my in-laws!

All in all, a great Christmas, even if the video that I wanted to post caused me no end of difficulty and ultimately resulted in this post being delayed by 36 hours.