Book Review: The Name of the Wind 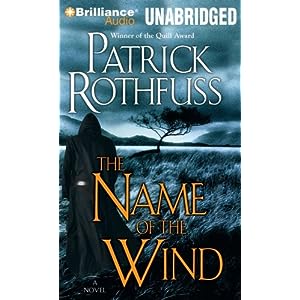 I'd heard a lot of buzz for this novel as it was read by one of the book clubs I follow on Goodreads. Other than that, I didn't know much about it when I saw that I could check it out as an audiobook from my library. So, I did, and passed quite a few hours in the world Rotfuss created, with his hero/narrator, Kvothe.

There were a lot of things that I liked about this novel. First, I liked Kvothe. He's a hero rather in the mold of an Orson Scott Card hero: brilliant from a young age, destined for greatness, with a solid core of goodness. At the same time, Rothfuss avoids Card's preachiness and over-narration, while also giving him a bit of a darker streak that isn't (as it necessarily would be in a Card novel) mended.

The overall story is a bildungsroman, which is a snooty way of saying it's a coming-of-age story. [Warning: Lots of Spoilers Ahead] It's framed like this: our hero Kvothe is a legend in his own time--he's done great deeds that are known throughout the world--but he has, at what's still a relatively young age, retired from the world to a life of anonymity. A man known as Chronicler, who's made it his life work to seek out legends and suss out the truth of them, has found where Kvothe is hiding and seeks to get him to tell his true story, to reveal the man behind the legend. Oh yeah, and the sleepy little village where Kvothe hides begins early in the novel to be attacked by strange, dark forces.

All this, though, is a framing device. Although we get occasional "interludes" set in the present, the bulk of this novel deals with Kvothe's early life among the Edema Ruh (read: gypsies), the loss of his family, his hard life alone on the streets of a nasty city, and his entry into a university devoted to the study of magic in its various forms.

All in all, it was an engaging story. Many of the characters teetered on the edge of being flat and a bit generic--certainly, none of them has the vividness that Kvothe gets, though we do get hints of individuality and interest, at least from some of them.

A few things bothered me. First, although I like the idea of all the very literary things Rothfuss is doing--the framing narrative, his poetic opening that's echoed in the ending, some of his asides about "fairy stories" (read: simplistic fantasy), none of them quite seemed to click for me. One problem with the framing narrative is that, naturally enough, it lowers the tension on the main story being told. We know that Kvothe survives and thrives, because he's telling his own story and throughout the novel he hasn't yet done most of the things that will make him legendary. Indeed, all the suspense is in the "present" story, where we have sinister forces very active in the world and where we have what we soon enough realize is a broken hero: why has he withdrawn from the world, why has he apparently lost a good bit of his power and ability, and will he rise to the new threat (the one that actually does have suspense and interest on its side)?

The story that is the focus of the novel isn't nearly wrapped up. This isn't a surprise, really, given what we're told in the framing story, but it's still unsatisfying. It just kind of stops. Because the narrator is tired and it's time to stop for the night. Are some plot threads wrapped up? Sure. He calls the name of the wind, he avoids being expelled, and he even gets promoted to a higher level of student. But in so many other ways, it didn't seem like the right end to the story. Rothfuss has a poetic bit about a silence in three parts--the same thing he used to open the book, though it's a bit different by the end (of course). It serves to offer a sort of formal closure, the sort of thing that might work well enough in a song (appropriate enough, since Kvothe is, among other things, a musician), but the overall unsatisfying point at which he's left off the story can't be smoothed over by a formal trick--it just didn't work for me.

Still, the plot, the characters, and the telling of the novel were all good enough that I will be listening to the next book of the series before too long.
Posted by Sherck at 6:20 PM