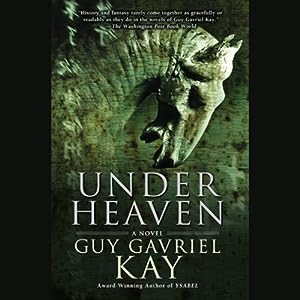 A number of my Goodreads friends, including an author I really like, are very high on Guy Gavriel Kay's work, so I've been meaning to check out his work. I picked up Under Heaven both because it stands alone and because it was the only GGK work available as an audiobook (which seem like the only kind I can find time to finish right now!). There were some elements that I really liked about Under Heaven, but on the whole I found it to be uneven work.

The story, set in a fantasy China (Kitai), revolves around the three oldest children of a renowned general. Our central figure, Shen Tai, the second son, has taken upon himself the task of living in a haunted valley where his father won an important victory, and burying some of the thousands of dead from both sides. He plans to spend the entire two year mourning period burying the dead, and his time is drawing to a close as the novel opens. During his time in this valley, which borders Kitai and one of its long-time enemies, both empires have honored Shen Tai's work by sending regular supplies to him. At the start of the novel, he is honored beyond such utilitarian aid when the Empress of the Taguran empire bestows upon him an extravagant gift of 250 Sardian horses, in a world where even one or two such horses would be a princely gift. At the same time, Shen Tai survives an assassination attempt. In other words, his life just got a whole lot more complicated.

All that happens early in the novel, so I don't feel like I'm spoiling anything. To talk about the roles of his older brother and younger sister, I would have to start spoiling, so instead I'll get to the review.

The good: I loved the sense of culture in the novel. Our characters live in a poetic culture: they quote poetry, they write poetry, and as he follows them, Kay's prose frequently rises to the poetic. I appreciated the sense of a culture that Kay establishes, their ways of seeing the world. Much of the plot revolves around court intrigue and the political implications of this gift--it both elevates Shen Tai and puts him in a difficult position as others try to manipulate or eliminate him to claim the gift for their own purposes.

The less-good: The pacing was very uneven. At times, Shen Tai's story moved awfully slowly (his sister's story moved along a bit better). Related to this, Kay shifted perspectives at times from a novelistic perspective written in the present tense to a world-historic perspective from some time in the future, distancing us from the action. This played a big role in making the ending of the novel feel rushed. What also happened, though, is that it seemed like the promise of the novel was revoked by the end. We tend to assume that our protagonists will make the decisions and play the roles that are decisive in the plot, but in a number of ways this wasn't the case in Under Heaven. Shen Tai's story--as well as his sister's--gets swept aside in the rush of larger events, and it's the decisions of others that make the difference. Our protagonists all become fairly passive at the crucial juncture, which is unsatisfying. We want to see our characters solve their own problems rather than having them resolved for them.

All in all, I'm glad I read Under Heaven, but it's not overly impressive. I haven't yet fallen in love with Kay's work.
Posted by Sherck at 8:38 PM